In February and March the cinnamon and mango trees, star-fruits, grafted avocados, cocoa and the inca-peanuts (Plukenetia volubilis) are flowering at Discovery Garden Pattaya (Thailand). But if you want to harvest fruits later you have to take certain precautions now. 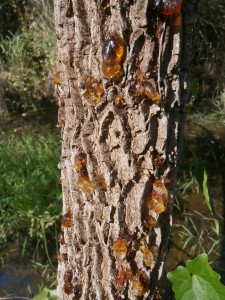 This tree releases a lot of resin that looks like amber

If you drive across Thailand in February and March you cannot but notice all those flowering mango trees. Mangos are originally native to South- and Southeast-Asia. In other words they were only introduced to the Americas after the discoveries. They have deep roots that can easily reach a depth of 6 meters. And they need the dry and rather cooler climate in order to blossom. If you water them during their time of blossoming, you do them a disservice since they will shed their fruits and grow leaves instead. 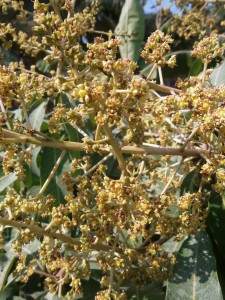 Mango trees flower all over Thailand in February and March

We only have one cinnamon tree at Discovery Garden and up to now I was rather reluctant to produce my own cinnamon since I would have to cut down my rather expensive tree and cut out the proper bark that is that cinnamon. But now that tree has started to flourish for the very first time and I hope to get seeds rather sooner than later. If the cinnamon can be propagated easily through seeds, I then can start my own cinnamon production. 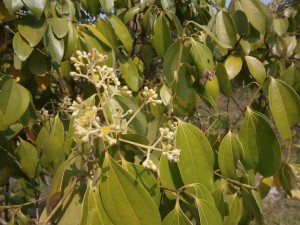 It took only seven month to grow inca-peanuts (Plukenetia volubilis) from seeds. This creeper is originally from the Amazon region and the seeds of that fruit make a very tasty and healthy nut as snack or as an addition to salads. An oil can be pressed out of those inca nuts which is also extremely healthy. So the first harvest of Plukenetia volubilis at Discovery Garden should happen soon. 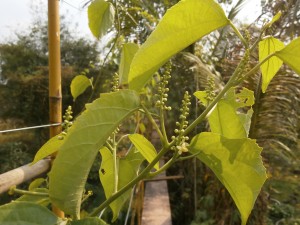 We have only to small star-fruit trees at our Pattaya garden, but they were grafted and therefore are blossoming and bearing fruits already. The pink flowers are very pretty. At our Nong Khai garden we have one mature tree that bears many fruits presently. The Thais who in general do not like any fruits with a sour taste just let those star-fruits normally fall to the ground and rot. I combine those rather sour star-fruits with the rather sweet mangos and make a delicious star-mango jam. 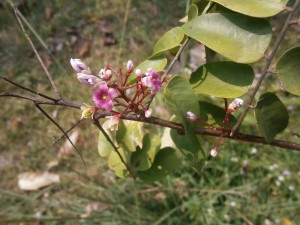 Cocoa is an important feature at Discovery Garden Pattaya where chocolate making in Thailand is one of the themes. Presently the first cocoa trees – grafted ones and some grown from seeds – are flowering as well. The grafted cocoa trees bear some fruits already whereas the ones grown from seeds in general still lose their fruits. Visitors can experience home grown chocolate making at our garden, we believe to be the only such place all over Thailand. 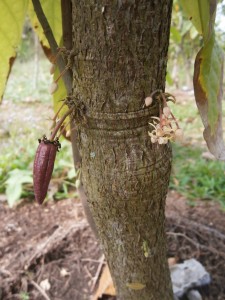 We grow presently three different avocado varieties at Discovery Garden Pattaya, naturally all those avocados are grafted. The tallest tree is about three meters high, the smallest 20 centimeters. Some of them have now also started to flower, but I fear we will lose all fruits because we are watering them still. Avocados have very flat roots and we are afraid they might die without watering since they have only been put in the ground recently. The avocado flowers are small and filigreed, they are male in the morning, female in the afternoon and vice versa. So you only need one tree for harvesting. In Nong Khai I have one avocado tree grown from seed and it took 8 years until it bore fruits for the very first time, about 70 fruits. But since then – three years ago – it never had any fruits again at all. 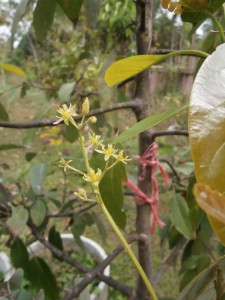 This is the flower of a very pretty ornamental banana. The red small fruits bear a lot of seeds which can easily be used for propagation. You can order the seeds from us hansfritschi1957@gmail.com and grow your own bananas. 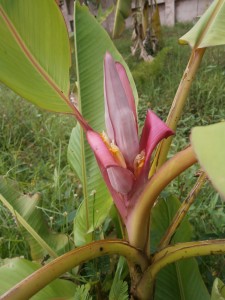 This attractive decorative banana can be grown from seeds