Chocolate or cocoa is normally not associated with Thailand. At Discovery Garden in Pattaya we grow cocoa and show visitors how to process the beans properly and make their own homemade chocolate. Children and grownups equally are having fun making chocolate in Pattaya. We also sell cocoa plants and seeds. 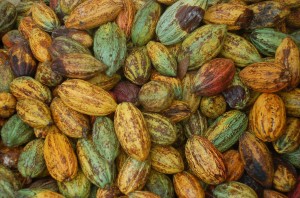 As a Swiss I have known chocolate for a lifetime, but in my 23 years in Thailand, I have not seen a single cocoa tree. Thailand has never produced a lot of cocoa. But during the last cocoa cycle, when prices went from one low to the next, the few cocoa farmers in the South of Thailand cut down their seemingly worthless cocoa trees since they could not make any profit with this staple. Now they may be sorry since cocoa presently fetches good prices, demand out of China is high.

It took me several detours until I could grow my own cocoa trees and beans at Discovery Garden in Pattaya. The first cocoa tree I saw grew at the garden of a small guest house where I stayed in Porto Seguro, Brazil. I more or less stole a few cocoa seed pots, but also bought on a local market what I thought were dried cocoa beans. Upon my return to Thailand I potted the dried seeds and carefully dried the fresh seeds too. That was the beginner mistake of the prospective and uneducated cocoa farmer: Nothing at all grew out of those dried cocoa beans. 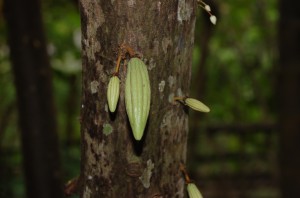 Once cocoa beans are taken out of their protective seed pots, they should be planted immediately. Thereafter fresh cocoa beans can only germinate for about two weeks and when I first dried them in the sun, I actually beat the shit out of them, killed them. So if you want to grow cocoa trees from seeds in Thailand, inquire whether or not we have fresh seeds available info@discovery-garden.org , if we have, we always send them by EMS. 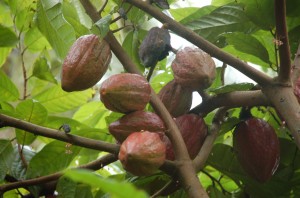 The cocoa fruits are almost ready for harvest

It took me two more or less useless trips to Vietnam before the Thai brother in law finally found a Thai supplier of fresh cocoa beans nearby. We have about 80 cocoa trees planted at Discovery Garden and the first two fruits (of our endeavors) are right now ready to be harvested. In the long term, we want to produce all cocoa ourselves that we turn into chocolate, but right now we buy the fresh stuff from Thai suppliers. 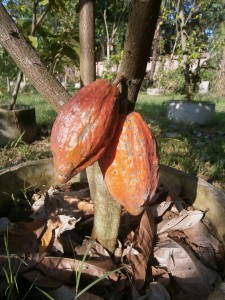 The two very first cocoas at Discovery Garden in Pattaya 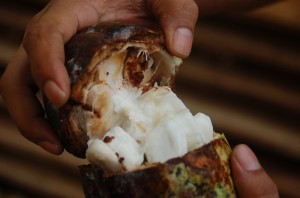 The fermenting cocoa beans are mixed around morning and evening during six sunny days. Without the fermenting there would be no chocolate taste in the end and the process also prevents the cocoa beans from germinating. You can smell the alcohol that results in the fermentation and if you have enough cocoa beans you can turn the liquid by-product into a cocoa wine, but that is another story. 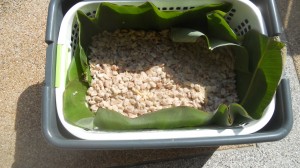 The fermentation of cocoa beans is about to start

After the fermentation is done, the cocoa beans are dried in the sun 10 days longer. They have now changed their inner and outer color, have turned brown: In retrospect it is no surprise to me any longer that those obviously fermented cocoa beans I bought in Brazil and planted in Thailand did not germinate… 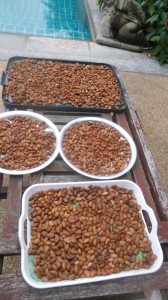 The fermented cocoa beans are dried in the sun

The next step in turning cocoa beans into chocolate is roasting the fermented beans. You can use a frying pan and turning on medium heat. Always turn around the beans, some will burst with a loud bang, the roasting takes about 20 minutes.

Roasting the cocoa beans in Pattaya

Let the roasted cocoa beans cool down then peel them. The beans have now changed their color into a shiny brown, you can see the chocolate appear. Try eating one of those roasted beans: There is the chocolate taste, but it is a bitter experience. 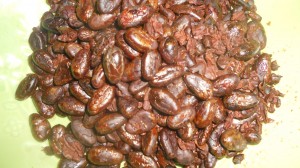 The roasted and peeled cocoa beans have now to be grinded. I use a strong blender and the mass you get is a bit greasy. Now add at least as much volume of sugar to the cocoa powder or mass. Add some fresh milk and start boiling. Thick the mass to your liking: Congratulations, you have produced your first homemade chocolate and have therefore graduated from the “Chocolate Academy” of Discovery Garden. 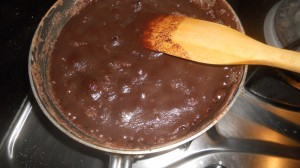 Your first homemade chocolate from Thailand