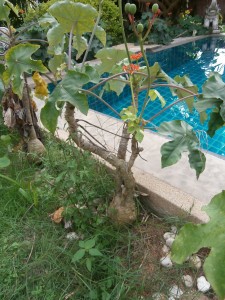 I planted my Australian bottle plants around the swimming pool

Luckily the Australian bottle plant has many names: Jatropha podagrica is its scientific name, but the mainly decorative plant is also known as Physic nut or Buddha belly plant. The bottle part in the name or the belly are clear: They describe the physical appearance of the trunk. But how the Australian part got into the name is a bit a riddle, the Jatropha podagrica derives originally from tropical America, but is nowadays grown in many countries. 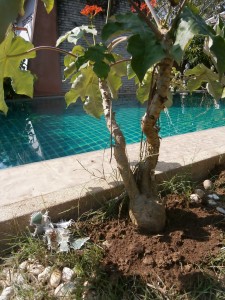 With clusters of small red flowers on longer stems it is an attractive and decorative plant that is also drought resistant. It can easily been grown from seeds. 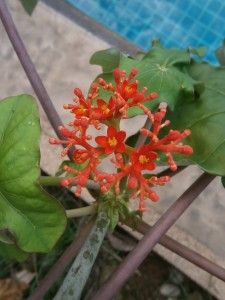 As a matter of fact, one is not supposed to steal seeds from any Botanical Garden, but when I was in Chiang Mai some years back, I could not resist the temptation. I took some brown and green seed pods with me and placed them on the desk in my hotel room. 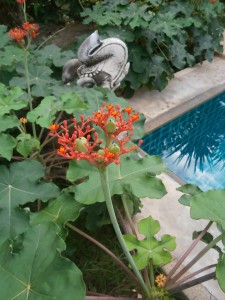 But when I later returned to my room, half of them were gone, probably stolen by the room maid, I thought. But during the night I suddenly heard a bang and then realized the small capsules containing three seeds explode when mature and throw the seeds of the Australian bottle plant over some distance in all directions. 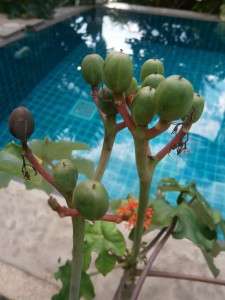 After turning brown, the seed pods of the Australian bottle plants will explode